A new paper presents a mathematical proof that entanglement isn’t just a weirdness unique to quantum theory, but something that is a necessary feature of any theory that describes the universe we know. If you remember my earlier blog post about entanglement, you’ll know that I’m obsessed by it. If not, then I’ll quote myself from that earlier post: “Entanglement is what Einstein referred to as ‘spooky action at a distance.’ When two quantum particles are entangled, their states are then paired. An action on one particle will immediately affect the other, regardless of how far they are separated. If it occurs to you that this can result in a violation of the speed of light, then you’ll understand why Einstein was so perplexed by it. Nevertheless, entanglement does exist and we have to deal with it.” 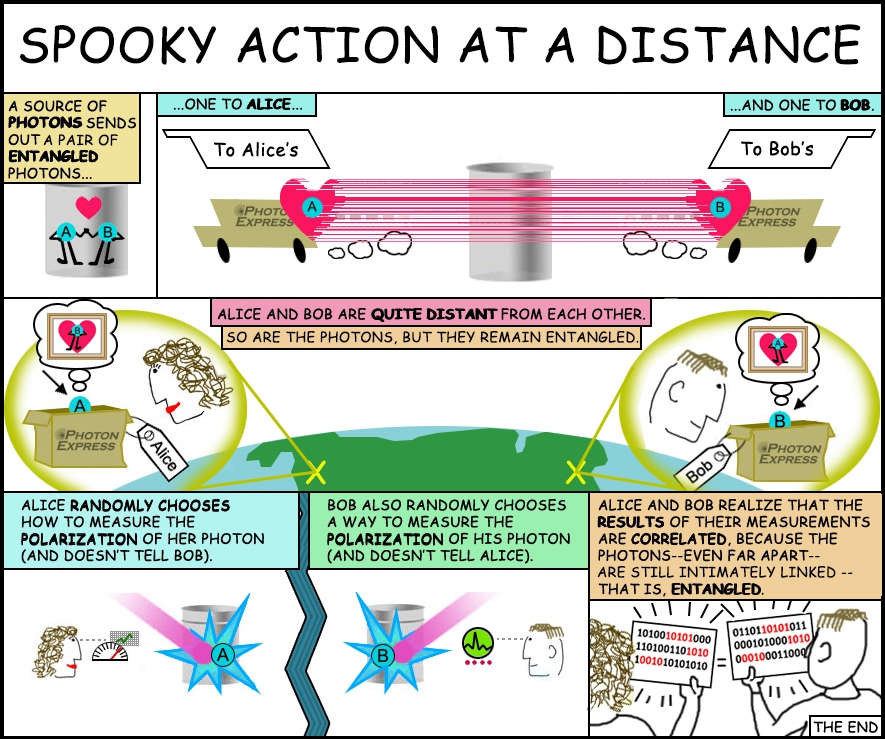 The cartoon above gives what amounts to the classic explanation of the phenomena, but doesn’t give a real sense of just how weird things can get. But if you want a sense of its strangeness, check out the article the cartoon comes from: Love, quantum physics and ‘entanglement’. Of course, I can’t exactly complain about being inspired by this phenomena to take a leap beyond the deep end of theoretical physics, as I wrote an entire novel inspired by entanglement.

Getting back to the current article, the really amazing thing is the underlying message about entanglement. The mathematical proof means that even if somebody comes up with some amazing new theory that supersedes quantum mechanics (despite it being the most successful physical theory of all time), we are still stuck with entanglement. So even if this hypothetical new theory explains the universe without all the strange aspects of quantum mechanics, we are still guaranteed that the weirdness of entanglement will remain. In other words, there is no way to explain the universe without mind-bending weirdness. I love it!