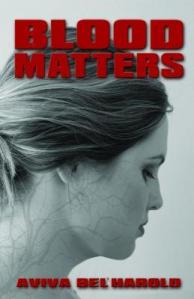 Aviva Bel’Harold’s BLOOD MATTERS is young-adult speculative fiction that reminds me why I am drawn to such novels despite being far beyond the target age. This is a fresh and highly original take on the vampire myth that inspired a sense of discovery that brought me back to the novels of my youth. This feels like old-time science fiction with vampirism being a symbiotic relationship between a human and an exotic, possibly alien, creature. It takes the vampire pathology in a whole new direction while offering a believable spin on how traditional vampire myths derived from it. It felt so much fresher than typical vampire makeovers that do little more than slap a daylight-sparkle paint job on the same old myth.

Bel’Harold has an immersive writing style that draws you deep into her characters. She does a fantastic job of developing protagonist Brittany after she becomes “infected” with this vampire symbiont. Brittany enters the story as a normal teen, and reacts to her new reality as you might expect, resisting. Even after she finally accepts that she can’t escape her new reality, she continues to resist the temptation to allow the change to alter her moral compass. This internal struggle is where the novel really shines. When her situation reaches a point where she realizes that her moral beliefs aren’t surviving the change, she is determined to take drastic action to prevent this. Her internal struggle not only changes her, but even the symbiont within her. I won’t spoil the ending, but I admire Bel’Harold for the way in which her character development made the conclusion of the novel feel like the natural result of a heroic protagonist’s struggle. This novel breathes refreshing new life into a favorite old myth.